2022 was meant to be the year of full recovery after the Covid-19 crisis, but was strongly shaken by the Russian invasion of Ukraine. War returned to the heart of Europe for the first time since the Balkan’s conflict in the 1990s of the last century, causing an immense humanitarian, geopolitical and economic damage across the continent. The war in Ukraine has fueled the polarization of social and political discourses and the dissemination of disinformation and extreme messages that difficult  the search for effective solutions to our main global challenges.

Identifying and changing these narratives has become one of our biggest dares as a society, and Re-Imagine Europa’s innovative Narratives Methodology is focusing in that shared mission, working with a wide range of public and private stakeholders from all Europe. At RIE,  we strive to be an active voice to build bridges in the public debate and reinsure the strength in diversity that defines the European project. These ambitions have been embodied in RIE’s multiple events, meetings, reports, and workshops organized during 2022, and will be reinforced in 2023 with the launch of new projects by our Task Forces in Democracy in a Digital Society, Sustainable Food Systems and Innovation, and Economy for the 21st century. 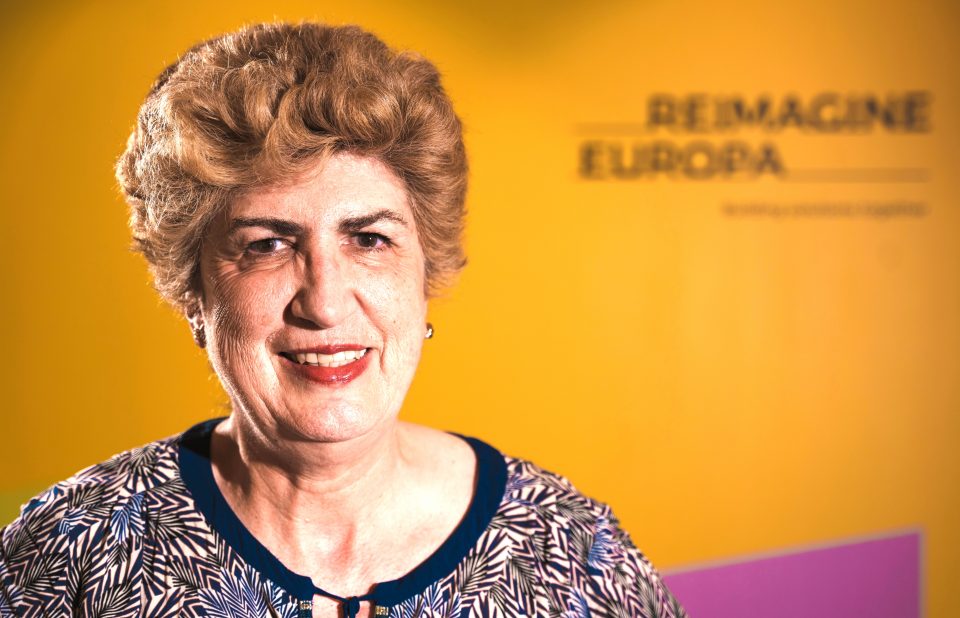 For the first time since 2019, this year we convened our closest partners and advisors in Brussels at the Re-Imagine Europa Forum 2022 (May 23rd-25th), which focused on  “Emotions, Narratives and the Future of Europe”.  To explore how emotions and narratives shape our minds and impact political decision-making, participants were guided by the insights of the neuroscientist Antonio Damasio, and the sociologist Manuel Castells. In addition to two workshops organized for the RIE Planet and RIE Democracy Task Forces, the Forum was also marked by the announcement of Professor Maria João Rodrigues as the first Chairperson of the Advisory Board of Re-Imagine Europa. At her opening speech, Professor Maria João Rodrigues pointed out that “Re-Imagine Europa truly represents a new generation of think tank in Europe” and cited the importance of the extensive network of RIE knowledge partners: “The European project is a matter of creativity, all the time, every day; so when we bridge the policy-making world and the intellectual world, in the best of references, we can go far, because ideas are a powerful engine and I have seen this in my life in many moments”. Lastly, she stressed the important aspect of communicating with the European citizens, a central part of RIE’s work and “the capacity [of RIE] to reach out larger shares of citizens, because the European citizens are and will be the main part of the European project”.  Reinforcing its work by reaching, engaging a empowering citizens is one of RIE’s main objectives for 2023.

A Year in Review

2022 has been the year to expand and reinforce RIE’s Planet, the key project of RIE’s Task Force on Sustainable Food Systems and Innovation. The main objective of this Task Force is to develop a shared understanding of what is meant by sustainable food systems and agriculture; and to assess how innovations can support the transition to a European agricultural model promoting social, environmental, and economic sustainability.  To achieve these objectives, RIE works with a wide range of stakeholders that include scientists, policymakers, and representatives of organic farming and the food industry. Some of the key activities developed by this Task Force during 2022 are:

The online event “On the Ground: A Discussion with European Farmers”, convening the Task Force’s Expert Committee and European farmers from diverse backgrounds, practicing different forms of agriculture. In her keynote speech, Irene Tolleret, member of the European Parliament, gave an overview on how the European Green Deal can be an effective tool to face the reality of climate change. In her closing remarks, Ms Hilde Crevits, Flemish minister of Economy, Innovation, Work, Social economy, and Agriculture, also stated that “food and farming has always been at the center of European integration and policy. Therefore, it is important that the opinions and solutions from our European agriculture sector are taken into account when we are considering the future of Europe and European food system.”

In September, the  Task Force on Sustainable Food Systems and Innovation launched the second phase of the Planet Project. Working with RIE’s innovative Narrative Methodology and a network of over eighty experts, the Task Force focuses on very specific challenges to contribute to the global challenge of building a robust and resilient food system and becoming a global standard for sustainability while protecting biodiversity and reducing land-use.

The struggles to articulate an inclusive and constructive debate are clearly noticeable in the field of global food security, according to the Presentation on New Narratives on Food Systems and New Technologies in Agriculture in times of global uncertainty, organized by Re-Imagine Europa for the Task Force’s Steering and Expert Committees, on November 16th. The analysis, carried out by Andrzej Nowak, RIE’s Chief Narrative Scientist, and Marcin Napiórkowski, Contemporary Mythologies Scholar, showed the proliferation and development of narratives that build the citizen’s beliefs and emotions, shaping highly polarized public opinions about food systems and sustainable agriculture. According to professors Nowak and Napiórkowski, “reducing polarization is a key step to building bridges and providing new insights” about this crucial topic. Nowak and Napiórkowski reinsured the importance of moderating the debate toward less extreme narratives to answer citizen’s concerns and find solutions to address short-term necessities while supporting long-term sustainability goals.

In light of the European Commission upcoming legislative proposals on Pesticides, New Genomic Techniques (NGTs) and the Sustainable Food Systems Framework, RIE also organised an Expert Workshop on Regulatory Approaches to Sustainability and Innovation, on December 13th and 14th. The purpose of the workshop was to consider how sustainability might be incorporated or integrated with safety considerations involving both new and traditional breeding techniques within broader EU policies. The starting point was to recognize the need to imagine a new model for European agriculture shared by all stakeholders involved, whilst ensuring social, economic and environmental sustainability.

“There is no ‘silver bullet’ to fix these complex issues: only a balanced set of tools that can be adapted to the diverse approaches to agriculture could be successful” – Professor Andrzej Nowak

Democracy in a Digital Society

RIE’s Task Force on Democracy in a Digital Society, chaired by Professor Manuel Castells, aims to rethink our disrupted media landscape, including both social and traditional media, so it can reflect the traditional European values of democracy and freedom. In 2022, our Task Force was involved in the organisation of multiple events, meetings and workshops. In addition, two commissioned reports were issued by Re-Imagine Europa.

On March 9th 2022, Re-Imagine Europa and SoBigData++, the largest pan-European social science data research project, organised an online event to present the white paper “Towards a Digital Ecosystem of Trust: Ethical, Legal and Societal Implications”. The European vision of a digital ecosystem of trust that the white paper outlined was based on innovative technological solutions, a comprehensive regulatory framework, and respect for the core values and principles of ethics that are shared by the Union’s Member States. The event had the participation of over eighty key representatives from academia, policy, industry, CSOs, NGOs, and other stakeholders. Establishing a framework where data subjects can feel safe sharing their data is crucial to facilitate the development of data science in Europe. In October, SoBigData Research Infrastructure (RI) Preparatory Phase Project (PPP) was launched, which aims to move the RI forward from the simple awareness of ethical and legal challenges in social mining to the development of concrete tools that operationalize ethics with value-sensitive design, incorporating values and norms for privacy protection, fairness, transparency, and pluralism. 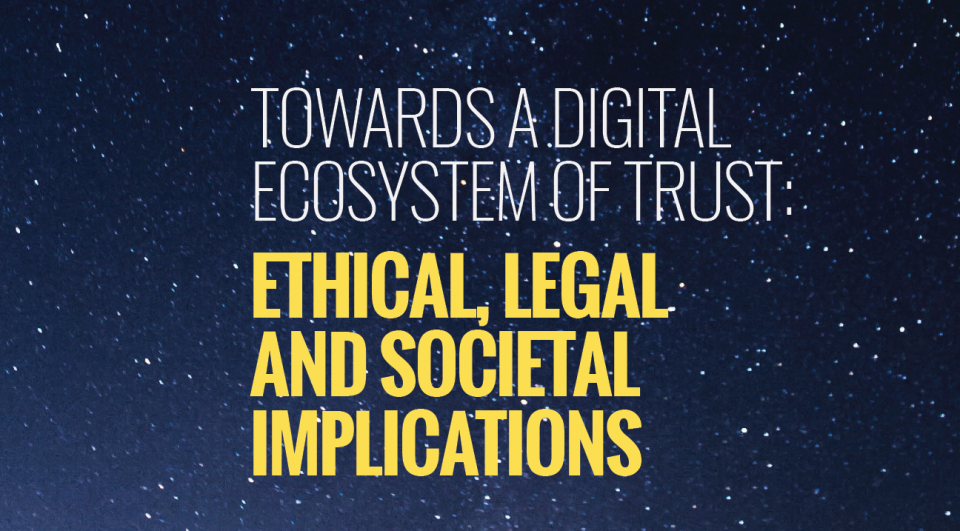 The International Day for Countering Hate Speech was established in July 2021 by the United Nations General Assembly over concerns about the rising proliferation of the phenomenon worldwide. Hate speech is indeed on the rise, and it doesn’t only affect its intended targets. Several institutions are concerned with this important issue, which attracted the attention of many EU member states. To mark the first International Day for Countering Hate Speech, on June 18th 2022, Re-Imagine Europa delivered the report, “Analisi comparativa sul fenomeno dell’istigazione all’odio online” (Comparative Analysis on the Phenomenon of Online Hate Speech), commissioned by the Commissione antidiscriminazioni del Senato della Repubblica Italiana. The report analysed the different attempts to devise a more efficient approach to regulation in several EU and non-EU countries, recommending adopting a diverse and more innovative method of regulating access to data, algorithms and AI and supporting a different business model to curb polarisation.

In addition, Re-Imagine Europa was also commissioned by Banca Intesa Sanpaolo to research and write a Report on Media Ecology in 2022 in Italy. In the last years, a multitude of messages of varying quality has flooded societies since the media went digital and many scholars argue that a significant portion of those messages tend to become toxic. There are no easy recipes to improve it. In the report, we argued that the quality of the media ecosystem will not improve without the intervention of leaders capable of bringing much greater attention to the topic. Furthermore, any improvement of the media ecosystem will serve not only to support the economy and the resilience of the society, but also the Italian future political prospects.

On November 17th and 18th, the International Forum on Digital and Democracy (IFDaD) returned to Rome for a second edition to analyze the increasing role of digital technologies in citizen’s lives: from work to the right to privacy and security, and access to education, healthcare, free press and other basic rights. The 2nd edition of IFDaD brought together prominent thinkers from academia, policy, non-governmental organizations, and other stakeholders to debate and exchange information, ideas and good practices about key topics of Digitalization and Democracy. The 2022 edition of the IFDaD was organised in close cooperation between Associazione Copernicani, Fondazione Luigi Einaudi, Re-Imagine Europa, and SoBigData++. Among the more than 30 leading experts that participated in this year’s hybrid format event were Věra Jourová, Romano Prodi, Gabriela Ramos, Roberto Viola and Vincenzo Aquaro. Read the full article here.

The Future of Clinical Trials and Health Data in Europe